“Language is a skin: I rub my language against the other. It is as if I had words instead of fingers, or fingers at the tip of my words. My language trembles with desire.”

Little scraps of paper with small hands’ handwriting in Spanish and English hung along the walls and carefully placed trinkets adorning the child’s pink-walled room. Painted multi-colored balloons tied with a large bow were the focal point of the room, which, in the child’s mind, had now become a museum of her life and discoveries. The museum would certainly have visitors from all over the world, therefore the ‘exhibits’ had to be captioned in both English and Spanish, the two languages she’d been exposed to since she’d begun speaking.

Mirna, the child’s hero and ultimate benefactor, would smile and glow telling her friends that the 2-year-old knew all her colors and numbers in clear Spanish and English. “Rojo, red. Amarillo, yellow. Orange, anaranjado. Blue, azul.” The tiny dark-haired chatterbox had made it a habit to say the colors and numbers she knew in both languages, eventually wanting to translate whatever she wrote or said, especially when she wanted to keep it secret from any monolingual snoops. Vanessita’s mind had been operating in a bilingual setting for as long as her memory stretched…

A diversity of languages always felt natural, yet distinguished. It was a superpower you could learn, opening up other worlds – people, books, movies on cable that were not yet subtitled. This power manifested before my eyes when I first saw my oldest brother Hector –15 at the time—navigating my family through tourist places like Orlando, FL, Washington DC and remote English-speaking enclave Shawnee-on-Delaware, PA. On international trips, he was our communications expert, acquiring a certain status in my mind, since even my mom had to depend on his assistance to communicate.

So it went, the hype about being bilingual. I kept pushing myself to learn more, often frustrated when I watched E!’s “Talk Soup” without subtitles and only made out 15 percent of the content. Or, having small successes like learning the word bullshit from “Top Gun” with Hector, calling liars bullshitteros from then on.

II. Queríamos norte: Across the Caribbean

When I was 11, things got real, when I found out we were moving to the United States for good. It was imperative that I became bilingual. My mom enrolled my brother Jorge and I in an intensive English course in Caracas, where we learned with adult businesspeople preparing for the globalized world. This course was an eye-opening foundation to the nature of the English language, as it taught me past and future tenses of English, as well as the struggle with pronunciation of words like “tough”, “daughter”, “through”, “though” and “laughter”.

In 1996, Boca Raton, Florida was my arrival destination as an immigrant in the United States. A strange melee of cultures that were not quite Latinos nor quite Americans: cultural and linguistic limbo. My family emphasized that we were never to lose our culture or our Venezuelan accent in Spanish. I cringed at Spanglish aberrations spoken by fellow Venezuelans with undecipherable accents combining Cuban-Argentinian-Colombian inflections. Or worse, peers who had immigrated one or two years before and had lost their ability to speak Spanish because their parents forbade them from doing so at home.

The pressure to speak both languages correctly was on Jorge and I. We spoke English in and out of school, and exclusively Spanish at home. My mom was learning English, but as head of household, she focused on running our house, paying bills, and raising her kids in a new society.

At sixteen and eleven respectively, Jorge and I were my mom’s communicational lifeline. Our first interpreting assignments were on “survival” issues. I recall us interpreting and sight-translating legal documents between my mom and leasing agents to rent our first apartment, to buy our first car, to get water/electric and cable set up, open bank accounts, enroll in private school, speak to immigration attorneys, or buy groceries. At the time, I didn’t have total grasp of the language or meaning, while documents were signed and payment terms were set up. To say these were stressful assignments is an understatement. Sometimes, though, as we spoke in basic English, a worker would say the magic words, “¿Hablan español?”. Relief would flood over us, and my mom would take over.

In those early years, I lived a bi-cultural, bilingual life between the US and Venezuela, never losing touch with either language, and picking up a third one – French – while in Caracas. These experiences strengthened my character, fueling my love for languages and my drive to become a language professional.

Despite my preparation for challenging assignments from a young age, it wasn’t as nerve-racking as the first time I had to prove my language abilities as a professional. In January 2012, 6 months after getting my bachelor’s degree, I moved to Iowa for a job as community organizer working with Latinos in the area. To tell you the truth, I had no idea what the job even meant at the time, but I did know we were expected to interpret and translate. How hard could that be, I wondered.

My second day on that job was the organization’s “rally and lobby” day, an event named “Occupy the Statehouse,” with over 500 people in attendance at the Iowa State Capitol. I was briefly introduced to the group of Spanish-speakers I would be working with, while most people were holding protest signs, chanting in ‘call-and-response’ fashion, and speaking to legislators. It was all a blur.

In the middle of the day, I was approached by another organizer. “Vanessa, we’re meeting with two state representatives to talk about wage theft,” she said. “Do you think you can interpret some of our members’ testimonies for the representatives?”

Of course I could have refused. This is my second day here, are you nuts? I don’t even know the background or terms about this issue; do you even have a notepad? There were a million reasons for me to say no, though I felt it would have left much to be desired if I did not perform. As the only native Spanish-speaker in the organizing team at the time, I shut down all doubts in my head. I agreed, my heart pounding as I approached the microphone near the state representatives.

It was a frenzy of interpreting consecutively and simultaneously: heartfelt testimonies about families who had been cheated out of their wages by unethical contractors; a woman broke in tears because she and her family were racially profiled and terrorized by the police. In response, obscure legislative and labor law terms in English trying to address the issues, sounding a little hollow to desperate community ears. As the interpreter, it was my ethical duty to remain impartial, yet, as an organizer I wanted to scream at the injustice. I delivered with a bit of both mixed into my inflection. Searching my head for vocabulary terms in English or Spanish to accurately reproduce messages between both sides, I felt like I had been interpreting for hours. It was only forty-five minutes. 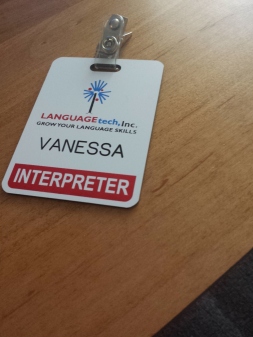 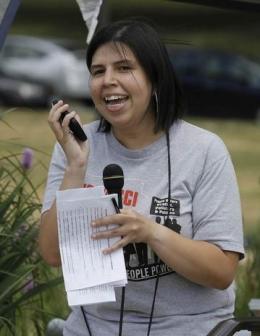 Becoming a Translator: An introduction to the theory and practice of translation — by Douglas Robinson

Vanessa C. Marcano, an up and coming professional, in front of the United Nations headquarters in New York — March 2014

Doing some community interpreting earlier in 2014

With all that had been going on that day during the crowded event, my brain was drained and my throat was dry and sore. Yet to me, it was one of the most professionally satisfying and exhilarating moments of the day: quickly and effectively relaying messages between two sides that wouldn’t have understood one another.

Vanessa Marcano-Kelly helps run a bilingual household with her husband Mike. She is a freelance interpreter and translator, working towards becoming certified to interpret in the courts of the state of Iowa. Vanessa currently works for a state agency, and at least twice a week, she is one of the workers at the counter asking new Iowans: “¿Hablan español?”

Vanessa C. Marcano-Kelly is a native of Caracas, Venezuela. She is a certified court interpreter in Iowa and a translator. She is a member of the Iowa Interpreters and Translators' Association and the Midwest Association of Translators and Interpreters, with significant experience in community interpreting, translation, and journalism in English and Spanish. Vanessa has interpreted in community meetings with the Polk County Sheriff, the US Department of Labor, former US Congressman Tom Latham, and at the Food Sovereignty Prize 2014 in Des Moines. She graduated with honors with a BA in Global Studies and French from South Dakota State University, and received a judiciary interpretation and translation specialization certificate from Des Moines Area Community College. She works as a court interpreter in the Des Moines metro, and as a translator for Principal Financial Group, a Fortune 500 company. She has written for several publications, including the Venezuelan magazine Estetica y Salud, and has a passion for linguistics/languages, photography, community involvement, healthier living and travel. Vanessa runs a bilingual, bicultural household with her husband, Michael. Her immediate family lives in Venezuela, Lithuania and the US. View more posts

One thought on “A bilingual existence”